An interview with John Allsopp at the CERN line-mode browser hack days. 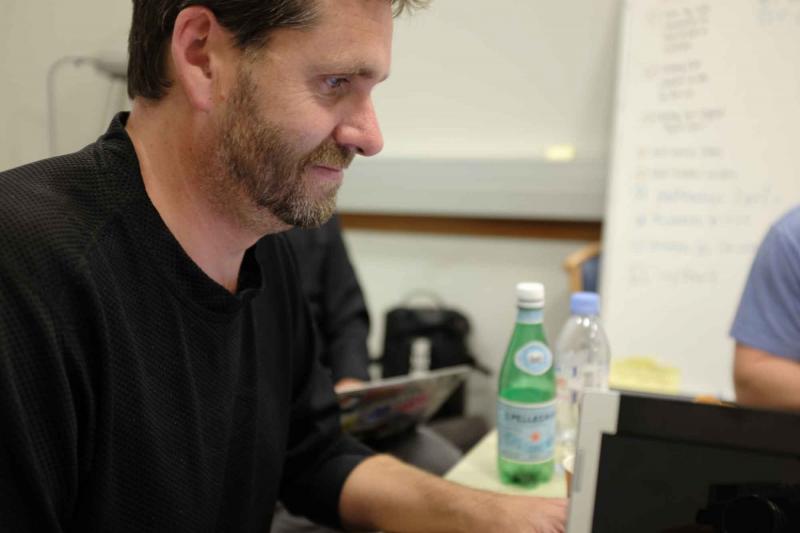 Why did you come to the CERN line-mode browser hack days?

I was invited to this fantastic hack event to recreate one of the very earliest browsers. We're creating a simulation of the experience of using that browser to give people who haven't used it or the old-style terminals a sense of what using the web was like 20 years ago. It tries to reproduce early web pages as authentically as possible, as well as taking modern pages and simulating what they would have looked like 20 years ago.

How different are those two displays?

In a way, they couldn't be more different. When we think of computing now, we think of graphical user interfaces, images – we think of drawing to a pixel-based high-density screen. Back then, the monitors were capable of drawing characters to a screen. There were no different fonts, no colours – not even greyscale. It was either black and white, or green and black. There was no mouse, no touch – in many ways you couldn't have a more different experience. Except maybe using punch cards [laughs].

So why go back to that?

George Santayana observed: "Those who forget history are condemned to repeat it." It's worth revisiting where we've come from to firstly understand what went into creating earlier technologies, and also to appreciate how far we've come.

I mean, you hear modern web developers complaining about [browser] compatibilities. And as someone who's been doing this for more than 20 years – the problems that we face as developers today on the web are so minimal compared to the challenges we used to have, that it's good to remind people how good we have it these days.

What are you concentrating on in the next two days?

One of the things I bring to the table is that I've probably been using the web as long if not longer than all the people here. I have first-hand experience with these sorts of devices. The web was invented around 1990 and became more widely used between '91 and '93. But it 1985 I was using [computing devices such as terminals] at my first year of university studying computer science.

Hopefully I can also bring experience of solving problems with CSS and JavaScript to the problems of emulating what the early web was like.

What do you hope people will take away from the experience of using the line-mode browser?

Hopefully people will think a little about the longevity of the web, the simplicity with which it started and how it has incrementally become better over time. I think we can learn something from that and apply it to solving all kinds of complex problems.

There's a term we used to use in the old days: "Trying to boil the ocean". You see that when people try to solve the entire problem rather than breaking problems into parts that each deliver benefits that you can iterate on. You learn as you go.

So iteration is important?

When the web was first released, hypertext as a concept had been around for more than 20 years. People had built sophisticated hypertext systems. Tim Berners-Lee proposed a paper about the WWW for Hypertext '91, a conference for hypertext theory and research. It was rejected! It was considered very simple in comparison with what hypertext systems were supposed to do.

There's a lesson to learn in starting simply and humbly, and iterating on top of that. We should be in awe of how far so many people have brought the web since that time. We collectively have made the web what it is today. It's amazing to see how far we've come.

It's a bit like archaeology – we've been diving through the source code and finding elements. I thought I had a pretty encyclopedic knowledge of the web and its history. But today for example I discovered the <HP1> element in HTML – the "highlighted phrase" element – never heard of it! It's been fascinating to do some spelunking and recover some of that history. It's only been 20 years and we've almost forgotten it. It's about keeping the history alive.

It's been a fantastic couple of days working with some amazing people. This is incredibly valuable and I look forward to people getting their hands on what we've done. It's all been done in the open, very much in the spirit of the web that we're celebrating here 20 years after the technology was put in the public domain. What we build is all on Github. I'd love people to take what we've done and continue to refine it.